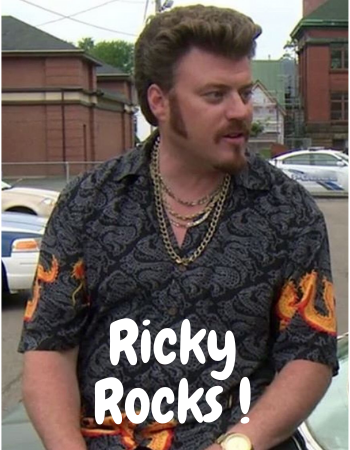 You have seen the houndstooth shirts and heard the quotations. These are like gold nuggets for TPB fans.

Actor Robb Wells plays Ricky in Trailer Park Boys with great conviction, so much so that he has a separate fan following willing to spend hours just to have a glimpse of the hugely talented actor.

What started as a simple Canadian mockumentary has now reached epic proportions.

Of course, the entire team takes the credit but Ricky adds that extra spark all the time.

Try out his looks in the Halloween season !

It is the season to impress and create waves all around. You might want to try impersonating the Trailer park characters for adding that extra variety and spice to the party.

In case you love Bubbles, putting on those thick glasses is a foregone conclusion.

Ricky’s personality demands that black and white bowling shirt. It looks ultimate for any occasion.

Take a glimpse into the personality

Go to start of page…