The shooting process is still underway, hence loyal fans will have to wait a bit more for the new Trailer Park Boys Season 13. After 12 live seasons the new season that came on Netflix was the animated series. There are still mixed opinions around but the launch of the Trailer Park Boys Animated series on Netflix has given the producers some extra time. The new live season still seems a bit far away. The 10 animated episodes however, allow us to get in touch with the fun and humor that has created a cult feeling across the globe. 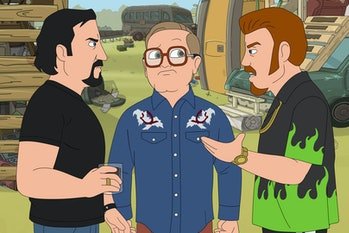 If you look back, the first season premiered in 2001 and from that point onwards it seems like a roller coaster ride. The only time where you can find a big gap is the time between season 7 and 8. And then the movies added some extra points to the stardom.

Frankly speaking, the cartoon characters were a bit of a shock for some fans. You just can’t get the same feeling every time. The storylines in the animation version were also a bit far-fetched. Well, if you have tasted sugar, jaggery will not provide the same experience!

When the 13th Season eventually comes around what we will miss is the dedicated trailer park supervisor.

Here is a short trailer of the cartoon